Powerhouse 4GL was launched in 1982 and was, at the time, a visionary fourth-generation programming language offered by Quasar (which changed its name to Cognos in 1983). The company was subsequently acquired by IBM in 2008 and then by UNICOM in late 2013.

Powerhouse 4GL allowed developers to very quickly develop robust, complex applications in a fraction of the time that traditional development languages otherwise allowed. A key element was the central data dictionary that defined all attributes of the database, tables, and columns, and the relationships between them.

While many companies adopted Powerhouse 4GL in the 1980s and 1990s, its poor browser compatibility caused it to lose ground to other development languages.

Influential Software was one of the first supporters for Powerhouse 4GL from its very early days. Our company has worked with the Powerhouse 4GL family of products for over 20 years, and we maintain a core team with Powerhouse skills in-house, ready to be deployed as required.

Our Powerhouse 4GL experience includes the following companies and systems:

We have the resourcing and know-how to support your PowerHouse systems. Talk to us today. 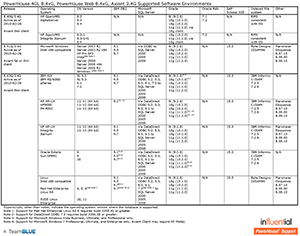 Kent: 11 Hollingworth Court, Turkey Mill, Ashford Road, Maidstone, Kent ME14 5PP
Registration No: 2779820 | VAT No: 203 9828 06
City of London: Floor 6, 1 St Katharine's Way, London E1W 1UN
Glasgow: 272 Bath Street, Glasgow G2 4JR
Privacy Policy | Cookie Policy | Terms and Conditions
t: 0845 643 0592 | e: contact@influentialsoftware.com
We use cookies on our website to give you the most relevant experience by remembering your preferences and repeat visits. By clicking “Accept All”, you consent to the use of ALL the cookies. However, you may visit "Cookie Settings" to provide a controlled consent.
Cookie SettingsAccept All
Manage consent

This website uses cookies to improve your experience while you navigate through the website. Out of these, the cookies that are categorized as necessary are stored on your browser as they are essential for the working of basic functionalities of the website. We also use third-party cookies that help us analyze and understand how you use this website. These cookies will be stored in your browser only with your consent. You also have the option to opt-out of these cookies. But opting out of some of these cookies may affect your browsing experience.
Necessary Always Enabled
Necessary cookies are absolutely essential for the website to function properly. These cookies ensure basic functionalities and security features of the website, anonymously.
Functional
Functional cookies help to perform certain functionalities like sharing the content of the website on social media platforms, collect feedbacks, and other third-party features.
Performance
Performance cookies are used to understand and analyze the key performance indexes of the website which helps in delivering a better user experience for the visitors.
Analytics
Analytical cookies are used to understand how visitors interact with the website. These cookies help provide information on metrics the number of visitors, bounce rate, traffic source, etc.
Advertisement
Advertisement cookies are used to provide visitors with relevant ads and marketing campaigns. These cookies track visitors across websites and collect information to provide customized ads.
Others
Other uncategorized cookies are those that are being analyzed and have not been classified into a category as yet.
SAVE & ACCEPT
Powered by